AB Testing: A Quick Guide to Split Testing and SEO

What is AB Testing and how is it used?

Simply put AB Testing is the process of comparing user behavior between two versions of a web page or specific page element that share a similar function and a similar user audience in order to determine which performs better for a specific goal metric.

All monetized websites share a common goal of converting casual website visitors into engaged users that generate revenue – this is referred to as conversion rate.  AB testing is an invaluable strategy that can be implemented to optimize the design, user experience, and functionality of a website in order to maximize its revenue generating potential. 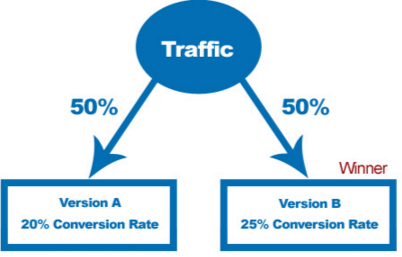 AB testing often called split testing allows you to make the most out of your existing user traffic.  The cost of obtaining paid traffic can often be high; however the cost of increasing the conversion rate of that traffic can often be minimal by merely improving the experience for the user via AB testing.  Testing and comparing what may seem like small insignificant changes to website landing pages, call to actions, or lead capture pages can often lead to significant increases in sales, generated leads, and ultimately revenue.

What can be tested?

Any element on your website can be AB tested.

Google recently provided guidance on how best to implement AB testing from a search algorithm perspective and recommend abiding by the following:

If you’re running an AB test that uses redirects to send users from the original URL to an alternate variation URL, be sure to use a 302 temporary redirect status, not a 301 permanent redirect. Using a 302 status tells search engines that this redirect is temporary and will only be in place as long as you’re running the experiment and that Google should keep the original URL in their index rather than replacing it with the target of the redirected test page.  Javascript based redirects are also ok.

Cloaking – showing one set of content to humans, and a different set to the Googlebot crawler – is against Google Webmaster Guidelines, whether you’re running a test or not. Make sure that you’re not determining when to serve the test, or which content variant to serve, based on the user-agent string.  An example would be always serving the original version when you see the user-agent “Googlebot.” Remember that infringing Google Guidelines can potentially get a site demoted or removed from Google search results – probably not a desired outcome of your testing efforts.

Only Run Tests as Long as Necessary

The time required for a test to be considered reliable will vary depending on several factors like conversion rate, and how much traffic your website gets; an effective testing tool should tell you when you’ve gathered enough data to draw a confident and reliable conclusion. Once you’ve concluded the test, you should update the website with the higher converting variation and remove all elements of the test as soon as possible including any alternate URLs, testing scripts, markup, etc.

Many testing experts have concluded that one of the best ways to implement a website AB testing experiment is to simply follow the tried and true process of the Scientific Method outlined below:

Track your Successes and Failures

Document each test and report your results to all interested parties. Regularly provide test results and conclusions write ups to Marketing Teams, IT Development, Content Teams, and UI UX.  Tie any increase in conversion rates back to potential for increasing revenue and include this data in your write-ups.

Ask for feedback for new test ideas to implement.  You will be surprised how quickly the entire company will start to invest in an AB testing strategy when they get to play an active role in test ideation and are personally invested in the test success.